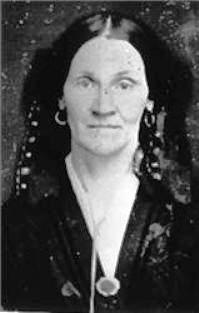 [The life of Mrs. Orson Hyde is replete with incidents of the early days, including the shameful occurrence of the tarring and feathering of the prophet, which took place while he was at her father’s house.]

[Her maiden name was Marinda M. Johnson, she being the daughter of John and Elsa Johnson, a family well known among the pioneer converts of Ohio. She was born in Pomfret, Windsor County, Vermont, June 28, 1815.]

In February of 1818, my father, in company with several families from the same place, emigrated to Hiram, Portage County, Ohio. In the winter of 1831, Ezra Booth, a Methodist minister, procured a copy of the Book of Mormon and brought it to my father’s house. They sat up all night reading it, and were very much exercised over it. As soon as they heard that Joseph Smith had arrived in Kirtland, Mr. Booth and wife and my father and mother went immediately to see him. They were convinced and baptized before they returned. They invited the prophet and Elder Rigdon to accompany them home, which they did, and preached several times to crowded congregations, baptizing quite a number. I was baptized in April following [1831]. The next fall Joseph came with his family to live at my father’s house. He was at that time translating the Bible, and Elder Rigdon was acting as scribe. The following spring, a mob, disguising themselves as black men, gathered and burst into his sleeping apartment one night, and dragged him from the bed where he was nursing a sick child. They also went to the house of Elder Rigdon, and took him out with Joseph into an orchard, where, after choking and beating them, they tarred and feathered them, and left them nearly dead. My father, at the first onset, started to the rescue, but was knocked down, and lay senseless for some time. Here I feel like bearing my testimony that during the whole year that Joseph was an inmate of my father’s house I never saw aught in his daily life or conversation to make me doubt his divine mission.

In 1833 we moved to Kirtland, and in 1834 I was married to Orson Hyde, and became fully initiated into the cares and duties of a missionary’s wife, my husband in common with most of the elders giving his time and energies to the work of the ministry.

In the summer of 1837, leaving me with a three- week old babe, he, in company with Heber C. Kimball and others, went on their first mission to England. Shortly after his return, in the summer of 1838, we, in company with several other families, went to Missouri, where we remained till the next spring. We then went to Nauvoo. In the spring of 1840 Mr. Hyde went on his mission to Palestine; going in the apostolic style, without purse or scrip, preaching his way, and when all other channels were closed, teaching the English language in Europe, till he gained sufficient money to take him to the Holy Land, where he offered up his prayer on the Mount of Olives, and dedicated Jerusalem to the gathering of the Jews in this dispensation. Having accomplished a three-years mission, he returned, and shortly after, in accordance with the revelation on celestial marriage, and with my full consent, married two more wives. At last we were forced to flee from Nauvoo, and in the spring of 1846, we made our way to Council Bluffs, where our husband left us to go again on mission to England. On his return, in the fall of 1847, he was appointed to take charge of the saints in the States, and to send off the emigration as fast as it arrived in a suitable condition on the frontiers; also to edit a paper in the church interest, the name of which was Frontier Guardian.

In the summer of 1852 we brought our family safely through to Salt Lake City, where we have had peace and safety ever since.

In 1868 I was chosen to preside over the branch of the Female Relief Society of the ward in which I reside, the duties of which position I have prayerfully attempted to perform.